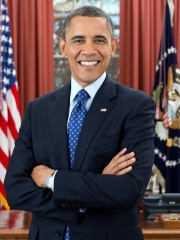 Barack Hussein Obama II ( (listen) bə-RAHK hoo-SAYN oh-BAH-mə; born August 4, 1961) is an American politician and attorney who served as the 44th president of the United States from 2009 to 2017. A member of the Democratic Party, Obama was the first African-American president of the United States. He previously served as a U.S. Read more on Wikipedia

MarketWatch
Key Words: Barack Obama has a problem with ‘defund the police’
Former President Barack Obama explained to Snapchat in an interview aired on Wednesday that he believes the 'defund the police' slogan is an ineffective rally cry.
Shawn Langlois
The American Conservative
Barack Obama and the Death of Idealism
Obama's deception and warmongering killed the "hope and change" he promised on the campaign trail. We shouldn't be sad to see them go. The post Barack Obama and the Death of Idealism appeared first on The American Conservative.
James Bovard
Eonline.com
Influencer Hannah Bronfman Announces Birth of Baby Boy in Surprise Convo With Barack Obama
Hannah Bronfman's baby is here, and he got a warm welcome from former President Barack Obama. On Thursday, Dec. 3, the wellness and fitness influencer announced the birth of her...
McKenna Aiello
Vanity Fair
Radhika Jones on Barack Obama, Stephen Colbert, and How 2020 Transformed Us
V.F.’s editor in chief writes about Jesmyn Ward’s presidential interview, and the rest of the Holiday issue.
Radhika Jones

Among politicians, Barack Obama ranks 347 out of 15,710. Before him are Pertinax, Baldwin IV of Jerusalem, Alaric I, Mahidevran, Louis II of Hungary, and George V. After him are Goliath, Liu Bei, Cambyses II, Vyacheslav Molotov, Caesarion, and Theodosius II.