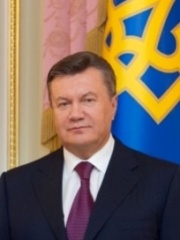 Viktor Fedorovych Yanukovych (Ukrainian: Ві́ктор Фе́дорович Януко́вич, pronounced [ˈwiktor ˈfɛdorowɪtʃ jɐnʊˈkɔwɪtʃ] (listen); Russian: Виктор Федорович Янукович; born 9 July 1950) is a Ukrainian politician who served as the fourth President of Ukraine from 2010 until he was removed from office in the 2014 Ukrainian Revolution. From 2006 to 2007 he was the prime minister of Ukraine. After rejecting the Ukrainian-European Association Agreement, Yanukovych was ousted from office in the 2014 Ukrainian Revolution. Read more on Wikipedia

Viktor Yanukovych is most famous for being the president of Ukraine from 2010 to 2014. He was impeached in 2014 and fled to Russia.

Among politicians, Viktor Yanukovych ranks 1,196 out of 15,710. Before him are Abu Ubaidah ibn al-Jarrah, Asparuh of Bulgaria, Pedro I of Brazil, John, King of Denmark, Frederick VII of Denmark, and Alexander of Greece. After him are Louis III of France, Yang Guifei, Lazar of Serbia, Claudia Octavia, Zewditu, and Jefferson Davis.