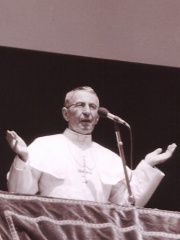 Pope John Paul I (Latin: Ioannes Paulus I; Italian: Giovanni Paolo I; born Albino Luciani [alˈbiːno luˈtʃaːni]; 17 October 1912 – 28 September 1978) was head of the Catholic Church and sovereign of the Vatican City from 26 August 1978 to his death 33 days later. He was the first pope born in the 20th century and the last one to die in the 20th century. His reign is among the shortest in papal history, resulting in the most recent year of three popes and the first to occur since 1605. Read more on Wikipedia

Pope John Paul I was the pope from August 26, 1978 to September 28, 1978. He is most famous for being the pope for the shortest amount of time in history.

Page views of Pope John Paul IS by language

Among religious figures, Pope John Paul I ranks 31 out of 2,272. Before him are Mary Magdalene, Andrew the Apostle, Saint Nicholas, James, son of Zebedee, Jonah, and Matthew the Apostle. After him are John the Apostle, Pope Pius XII, 14th Dalai Lama, Isaac, Saul, and Ignatius of Loyola.