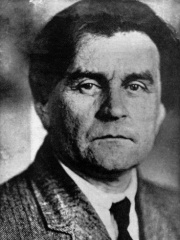 Kazimir Severinovich Malevich (23 February [O.S. 11 February] 1879 – 15 May 1935) was a Russian avant-garde artist and art theorist, whose pioneering work and writing had a profound influence on the development of non-objective, or abstract art, in the 20th century. Born in Kiev to an ethnic Polish family, his concept of Suprematism sought to develop a form of expression that moved as far as possible from the world of natural forms (objectivity) and subject matter in order to access "the supremacy of pure feeling" and spirituality. Malevich is considered to be part of the Ukrainian avant-garde (together with Alexander Archipenko, Vladimir Tatlin, Sonia Delaunay, Aleksandra Ekster, and David Burliuk) that was shaped by Ukrainian-born artists who worked first in Ukraine and later over a geographical span between Europe and America.Early on, Malevich worked in a variety of styles, quickly assimilating the movements of Impressionism, Symbolism and Fauvism, and after visiting Paris in 1912, Cubism. Read more on Wikipedia

Kazimir Malevich is most famous for the painting "Black Square" which is a painting of a black square on a white background.

Among PAINTERS In Ukraine