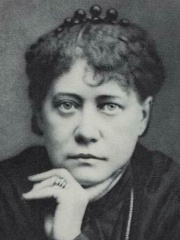 Helena Petrovna Blavatsky (Russian: Елена Петровна Блаватская, Yelena Petrovna Blavatskaya, often known as Madame Blavatsky; née von Hahn; Ukrainian: Олена Петрівна Блаватська, Olena Petrivna Blavatska; 12 August [O.S. 31 July] 1831 – 8 May 1891) was a Russian author who co-founded the Theosophical Society in 1875. She gained an international following as the leading theoretician of Theosophy. Born into an aristocratic family of mixed Russian-German descent in Yekaterinoslav, then in the Russian Empire (now Dnipro in Ukraine), Blavatsky traveled widely around the empire as a child. Read more on Wikipedia

Helena Blavatsky was a Russian-born author and occultist who co-founded the Theosophical Society in 1875. Her most famous work is "The Secret Doctrine," which was published in 1888.

Among occultists, Helena Blavatsky ranks 8 out of 9. Before her are Rajneesh, Grigori Rasputin, Baba Vanga, John Dee, Aleister Crowley, and Count of St. Germain. After her are Alessandro Cagliostro, Anton LaVey, Heinrich Cornelius Agrippa, Allan Kardec, Edgar Cayce, and Joachim of Fiore.

Among OCCULTISTS In Ukraine