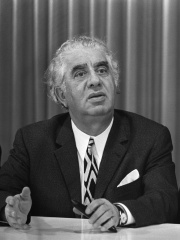 Aram Il'yich Khachaturian (; Russian: Арам Ильич Хачатурян, IPA: [ɐˈram ɪˈlʲjit͡ɕ xət͡ɕɪtʊˈrʲan]; Armenian: Արամ Խաչատրյան, Aram Xačatryan; pronounced [ɑˈɾɑm χɑt͡ʃʰɑt(ə)ɾˈjɑn]; Georgian: არამ ხაჩატურიანი; 6 June [O.S. 24 May] 1903 – 1 May 1978) was a Soviet Armenian composer and conductor. He is considered one of the leading Soviet composers.Born and raised in Tbilisi, the multicultural capital of Georgia, Khachaturian moved to Moscow in 1921 following the Sovietization of the Caucasus. Without prior music training, he enrolled in the Gnessin Musical Institute, subsequently studying at the Moscow Conservatory in the class of Nikolai Myaskovsky, among others. Read more on Wikipedia

Since 2007, the English Wikipedia page of Aram Khachaturian has received more than 791,400 page views. His biography is available in 63 different languages on Wikipedia making him the 56th most popular composer.

Among COMPOSERS In Georgia

Among composers born in Georgia, Aram Khachaturian ranks 1. After him are Zacharia Paliashvili (1871), Mikael Tariverdiev (1931), and Edvard Mirzoyan (1921).