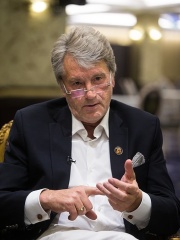 Viktor Andriyovych Yushchenko (Ukrainian: Віктор Андрійович Ющенко, IPA: [ˈwiktor ɐnˈd⁽ʲ⁾r⁽ʲ⁾ijowɪtʃ ˈjuʃtʃenko] (listen); born 23 February 1954) is a Ukrainian politician who was the third president of Ukraine from 23 January 2005 to 25 February 2010. As an informal leader of the Ukrainian opposition coalition, he was one of the two main candidates in the 2004 Ukrainian presidential election. Yushchenko won the presidency through a repeat runoff election between him and Prime Minister Viktor Yanukovych. Read more on Wikipedia

Viktor Yushchenko was the president of Ukraine from 2005 to 2010. He is most famous for being poisoned with dioxin in 2004 and nearly dying, but he survived and won the election in 2005.

Among politicians, Viktor Yushchenko ranks 823 out of 15,577. Before him are Carol II of Romania, Liu Shaoqi, Feodor III of Russia, Tamar of Georgia, Galla Placidia, and Sigismund II Augustus. After him are Romanos IV Diogenes, Emmanuel Joseph Sieyès, Alexander Kerensky, William III of the Netherlands, Constantine IX Monomachos, and Stefan Dušan.