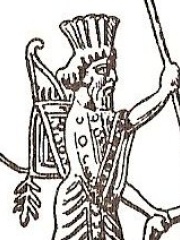 Cambyses II (Old Persian: 𐎣𐎲𐎢𐎪𐎡𐎹 Kabūjiya) was the second King of Kings of the Achaemenid Empire from 530 to 522 BC. He was the son and successor of Cyrus the Great (r. 550 – 530 BC) and his mother was Cassandane. Before his accession, Cambyses had briefly served as the governor of northern Babylonia under his father from April 539 BC to December 538 BC. Afterwards, he continued to roam in the Babylonian cities of Babylon and Sippar, before being appointed by his father as co-ruler in 530 BC. His father then set off on an expedition against the Massagetae of Central Asia, where he met his end. Read more on Wikipedia

Cambyses II was the son of Cyrus the Great and was the King of Persia from 530 BC to 522 BC. Cambyses II is most famous for his invasion of Egypt in 525 BC.

Among politicians, Cambyses II ranks 350 out of 15,710. Before him are Mahidevran, Louis II of Hungary, George V, Barack Obama, Goliath, and Liu Bei. After him are Vyacheslav Molotov, Caesarion, Theodosius II, Henry VI of England, Erich Honecker, and Helmut Kohl.