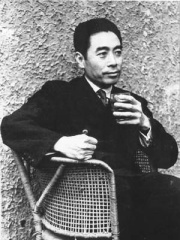 Zhou Enlai (Chinese: 周恩来; pinyin: Zhōu Ēnlái; Wade–Giles: Chou1 Ên1-lai2; 5 March 1898 – 8 January 1976) was a Chinese statesman and military officer who served as the first premier of the People's Republic of China from 1 October 1949 until his death on 8 January 1976. Zhou served under Chairman Mao Zedong and helped the Communist Party rise to power, later helping consolidate its control, form its foreign policy, and develop the Chinese economy. As a diplomat, Zhou served as the Chinese foreign minister from 1949 to 1958. Read more on Wikipedia

Among politicians, Zhou Enlai ranks 515 out of 15,577. Before him are Syngman Rhee, Didius Julianus, Ludwig II of Bavaria, Aurelian, Constantine II of Greece, and Fulgencio Batista. After him are Hans-Adam II, Prince of Liechtenstein, Dmitry Medvedev, Giuseppe Mazzini, François Hollande, Georgy Malenkov, and Gaiseric.