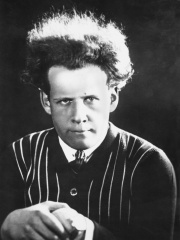 Sergei Mikhailovich Eisenstein (Russian: Сергей Михайлович Эйзенштейн, romanized: Sergey Mikhaylovich Eyzenshteyn; 22 January [O.S. 10 January] 1898 – 11 February 1948) was a Soviet film director, screenwriter, film editor and film theorist. He was a pioneer in the theory and practice of montage. He is noted in particular for his silent films Strike (1925), Battleship Potemkin (1925) and October (1928), as well as the historical epics Alexander Nevsky (1938) and Ivan the Terrible (1944, 1958). Read more on Wikipedia

Sergei Eisenstein is most famous for his work on the films Battleship Potemkin and October. He was a Russian filmmaker who made many films in the Soviet Union.

Among FILM DIRECTORS In Latvia

Among film directors born in Latvia, Sergei Eisenstein ranks 1. After him are Rosa von Praunheim (1942) and Fridrikh Ermler (1898).