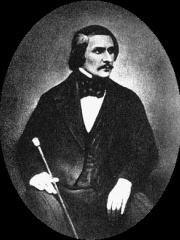 Nikolai Vasilyevich Gogol (; Russian: Никола́й Васи́льевич Го́голь, tr. Nikolay Vasilyevich Gogol, IPA: [nʲɪkɐˈlaj vɐˈsʲilʲjɪvʲɪtɕ ˈgogəlʲ]; Ukrainian: Мико́ла Васи́льович Го́голь, romanized: Mykola Vasylovych Hohol; 1 April [O.S. 20 March] 1809 – 4 March [O.S. 21 February] 1852) was a Russian novelist, short story writer and playwright of Ukrainian origin.Gogol was one of the first to use the techniques of surrealism and the grotesque in his works ("The Nose", "Viy", "The Overcoat", "Nevsky Prospekt"). Kornelije Kvas wrote that "the logical construction of Gogol’s The Petersburg Tales remains realistic, for the grotesque and fantastic elements fit in with the realistic matrix of events, following the logic of events that is close to the regularity of the unfolding of events in the reality that is accessible to us". Read more on Wikipedia

Nikolai Gogol is most famous for his short story "The Nose," which is about a man who wakes up one morning to find that his nose has disappeared.

Among writers, Nikolai Gogol ranks 57 out of 5,794. Before him are Aristophanes, Friedrich Schiller, Daniel Defoe, Euripides, Bertolt Brecht, and Jane Austen. After him are Gustave Flaubert, Stefan Zweig, Sappho, Maxim Gorky, Umberto Eco, and Lord Byron.