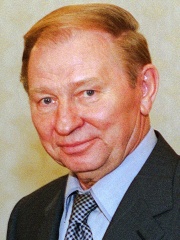 Leonid Danylovych Kuchma (Ukrainian: Леоні́д Дани́лович Ку́чма; born 9 August 1938) is a Ukrainian politician who was the second President of independent Ukraine from 19 July 1994 to 23 January 2005. Kuchma's presidency was surrounded by numerous corruption scandals and the lessening of media freedoms. After a successful career in the machine-building industry of the Soviet Union, Kuchma began his political career in 1990, when he was elected to the Verkhovna Rada (the Ukrainian parliament); he was re-elected in 1994. Read more on Wikipedia

Leonid Kuchma is most famous for being the president of Ukraine from 1994 to 2005. He was in office when the country became independent from the Soviet Union.

Among politicians, Leonid Kuchma ranks 1,610 out of 15,710. Before him are Maria Josepha of Austria, Constantine X Doukas, Vladimir II Monomakh, Gheorghe Gheorghiu-Dej, Louise Mountbatten, and Soong Mei-ling. After him are Ricimer, Cao Rui, Sasaki Kojirō, Karađorđe, Kamehameha I, and Charles-Henri Sanson.