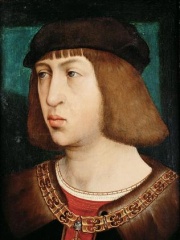 Philip I of Castile

Philip the Handsome (22 July 1478 – 25 September 1506), also called the Fair, was ruler of the Burgundian Netherlands and titular Duke of Burgundy from 1482 to 1506 and the first Habsburg King of Castile (as Philip I) for a brief time in 1506. The son of Maximilian I, Holy Roman Emperor and Mary of Burgundy, Philip was less than four years old when his mother died, and upon her death, he inherited the Burgundian Netherlands. Despite his young age, Philip quickly proved himself an effective ruler beloved by his people in the Low Countries, pursuing policies that favoured peace and economic development, while maintaining a steady course of government building. Read more on Wikipedia

Philip I of Castile is most famous for his marriage to Queen Isabella of Portugal, which unified the kingdoms of Castile and Portugal.

Page views of Philip I of Castiles by language

Among politicians, Philip I of Castile ranks 374 out of 15,710. Before him are Alp Arslan, Sigismund III Vasa, Semiramis, Priam, Peter III of Russia, and Selim III. After him are Abdul Hamid I, Hafez al-Assad, Philip VI of France, Syngman Rhee, Narmer, and Louis Bonaparte.

Among people born in 1478, Philip I of Castile ranks 6. Before him are Thomas More, Pope Clement VII, Francisco Pizarro, Hayreddin Barbarossa, and Giorgione. After him are Baldassare Castiglione, John, Prince of Asturias, Jan Gossaert, Pánfilo de Narváez, Surdas, and Barbara Jagiellon. Among people deceased in 1506, Philip I of Castile ranks 2. Before him is Christopher Columbus. After him are Andrea Mantegna, Yeonsangun of Joseon, Anne of Foix-Candale, Alexander Jagiellon, Sultan Husayn Bayqara, Sesshū Tōyō, Alexander Agricola, João I of Kongo, and Beatriz, Duchess of Viseu.