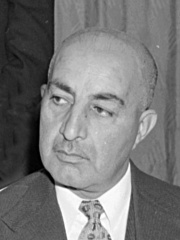 Mohammed Daoud Khan (Pashto: محمد داود خان), also romanized as Daud Khan or Dawood Khan (18 July 1909 – 28 April 1978), was an Afghan politician and general who served as prime minister of Afghanistan from 1953 to 1963 and, as leader of the 1973 Afghan coup d'état which overthrew the monarchy, served as the first president of Afghanistan from 1973 to 1978, establishing an autocratic one-party system. Born into the Afghan royal family and addressed by the prefix "Sardar", Khan started as a provincial governor and later a military commander before being appointed as Prime Minister by his cousin, King Mohammed Zahir Shah. Read more on Wikipedia

Mohammed Daoud Khan was a military general and politician who served as President of Afghanistan from 1973 to 1978. He seized power in a bloodless coup d'état on July 17, 1973, overthrowing the monarchy of King Zahir Shah, and establishing a republic with himself as president.

Among politicians, Mohammed Daoud Khan ranks 984 out of 15,577. Before him are False Dmitry I, Alexander I of Yugoslavia, Louis IV of France, Emperor Yingzong of Ming, Samuel of Bulgaria, and Baldwin I of Jerusalem. After him are Bolesław I the Brave, Ulrika Eleonora, Queen of Sweden, Zoë Porphyrogenita, Phocas, 5th Dalai Lama, and Muhammad II of Khwarazm.