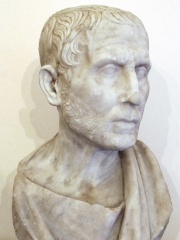 Posidonius (; Greek: Ποσειδώνιος Poseidṓnios, "of Poseidon") "of Apameia" (ὁ Ἀπαμεύς) or "of Rhodes" (ὁ Ῥόδιος) (c. 135 – c. 51 BC), was a Greek politician, astronomer, astrologer, geographer, historian, mathematician, and teacher native to Apamea, Syria. He was considered the most learned man of his time and, possibly, of the entire Stoic school. After a period learning Stoic philosophy from Panaetius in Athens, he spent many years in travel and scientific researches in Spain, Africa, Italy, Gaul, Liguria, Sicily and on the eastern shores of the Adriatic. Read more on Wikipedia

Posidonius was a Greek philosopher and astronomer who lived from 135 to 51 BC. He is most famous for his work on geography and astronomy.

Page views of Posidoniuses by language

Others Deceased in 51 BC