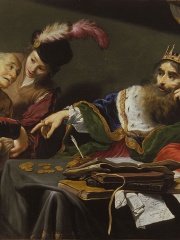 Croesus ( KREE-səs; Lydian: 𐤨𐤭𐤬𐤥𐤦𐤮𐤠𐤮 Krowiśaś; Ancient Greek: Κροῖσος, Kroisos; reigned: c. 585 – c. 546 BC) was the king of Lydia, who reigned from 585 BC until his defeat by the Persian king Cyrus the Great in 547 or 546 BC.Croesus was renowned for his wealth; Herodotus and Pausanias noted that his gifts were preserved at Delphi. Read more on Wikipedia

Croesus was the king of Lydia, in what is now Turkey. He is most famous for being the first person to mint coins.

Page views of Croesuses by language

Among politicians, Croesus ranks 291 out of 15,710. Before him are Charles VIII of France, Eva Perón, Xi Jinping, Alexander II of Russia, Victor Emmanuel II of Italy, and Nerva. After him are Sejong the Great, Rudolf II, Holy Roman Emperor, Cardinal Mazarin, Konstantin Chernenko, Charles VI of France, and Elizabeth of Russia.