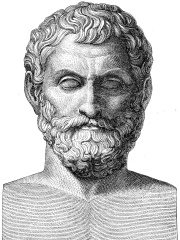 Thales of Miletus ( THAY-leez; Greek: Θαλῆς (ὁ Μιλήσιος), Thalēs; c. 624/623 – c. 548/545 BC) was a Greek mathematician, astronomer and pre-Socratic philosopher from Miletus in Ionia, Asia Minor. He was one of the Seven Sages of Greece. Many, most notably Aristotle, regarded him as the first philosopher in the Greek tradition, and he is otherwise historically recognized as the first individual in Western civilization known to have entertained and engaged in scientific philosophy.Thales is recognized for breaking from the use of mythology to explain the world and the universe, and instead explaining natural objects and phenomena by naturalistic theories and hypotheses, in a precursor to modern science. Read more on Wikipedia

Thales of Miletus is most famous for his belief that everything in the world is made up of water, air, earth, and fire.

Page views of Thales of Miletuses by language

Among philosophers, Thales of Miletus ranks 25 out of 1,089. Before him are Arthur Schopenhauer, Thomas Hobbes, Epicurus, Heraclitus, Baruch Spinoza, and Erasmus. After him are Seneca the Younger, Friedrich Engels, Averroes, Democritus, Diogenes, and David Hume.