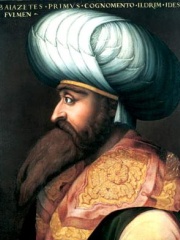 Bayezid I (Ottoman Turkish: بايزيد اول, Turkish: I. Bayezid), also known as Bayezid the Thunderbolt (Ottoman Turkish: یلدیرم بايزيد, Turkish: Yıldırım Bayezid; c. 1360 – 8 March 1403), was the Ottoman Sultan from 1389 to 1402. He adopted the title of Sultan-i Rûm, Rûm being an old Islamic name for the culturally Hellenistic Eastern Roman Empire. He decisively defeated the Crusaders at the Battle of Nicopolis in what is now Bulgaria in 1396. Read more on Wikipedia

Since 2007, the English Wikipedia page of Bayezid I has received more than 1,555,580 page views. His biography is available in 73 different languages on Wikipedia (up from 69 in 2019). Bayezid I is the 121st most popular politician (up from 140th in 2019), the 22nd most popular biography from Turkey and the 12th most popular Turkish Politician.

Bayezid I is most famous for his conquest of Constantinople in 1453.

Page views of Bayezid IS by language

Among politicians, Bayezid I ranks 121 out of 15,577. Before him are Tiberius, Clovis I, Diocletian, Cyrus the Great, Mustafa I, and Murad I. After him are Otto I, Holy Roman Emperor, Amenhotep III, Lorenzo de' Medici, Xerxes I, Claudius, and Mark Antony.