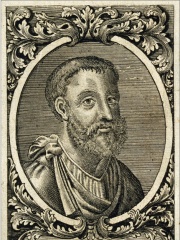 Aelius Galenus or Claudius Galenus (Greek: Κλαύδιος Γαληνός; September 129 AD – c. 200/c. 216), often Anglicized as Galen and better known as Galen of Pergamon (), was a physician, surgeon and philosopher in the Roman Empire. He is considered one of the most accomplished of all medical researchers of antiquity, Galen influenced the development of various scientific disciplines, including anatomy, physiology, pathology, pharmacology, and neurology, as well as philosophy and logic. The son of Aelius Nicon, a wealthy Greek architect with scholarly interests, Galen received a comprehensive education that prepared him for a successful career as a physician and philosopher. Read more on Wikipedia

Since 2007, the English Wikipedia page of Galen has received more than 1,730,486 page views. His biography is available in 97 different languages on Wikipedia making him the 4th most popular physician.

Page views of Galens by language

Among physicians, Galen ranks 3 out of 438. Before him are Hippocrates and Paracelsus. After him are Florence Nightingale, Josef Mengele, Willem Einthoven, L. L. Zamenhof, Basil of Caesarea, Robert Koch, Albert Schweitzer, Edward Jenner, and Andreas Vesalius.

Among PHYSICIANS In Turkey