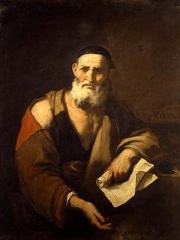 Leucippus (; Greek: Λεύκιππος, Leúkippos; fl. 5th century BCE) is reported in some ancient sources to have been a philosopher who was the earliest Greek to develop the theory of atomism—the idea that everything is composed entirely of various imperishable, indivisible elements called atoms. Read more on Wikipedia

Since 2007, the English Wikipedia page of Leucippus has received more than 378,279 page views. His biography is available in 61 different languages on Wikipedia (up from 60 in 2019). Leucippus is the 135th most popular philosopher (up from 139th in 2019), the 63rd most popular biography from Greece (down from 62nd in 2019) and the 13th most popular Greek Philosopher.

Leucippus is most famous for being the first philosopher to propose the idea of atoms.

Page views of Leucippuses by language

Among philosophers, Leucippus ranks 135 out of 1,089. Before him are Joseph Priestley, Herbert Marcuse, Ramon Llull, Al-Tabari, Jiddu Krishnamurti, and Emanuel Swedenborg. After him are Edith Stein, Johann Friedrich Herbart, György Lukács, Isocrates, Clement of Alexandria, and Baron d'Holbach.