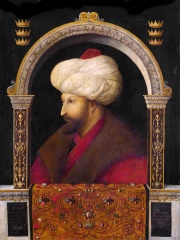 Mehmed II (Ottoman Turkish: محمد ثانى, romanized: Meḥmed-i s̱ānī; Turkish: II. Mehmed, pronounced [icinˈdʒi ˈmehmed]; 30 March 1432 – 3 May 1481), commonly known as Mehmed the Conqueror (Ottoman Turkish: ابو الفتح, romanized: Ebū'l-fetḥ, lit. 'the Father of Conquest'; Turkish: Fâtih Sultan Mehmed), was an Ottoman sultan who ruled from August 1444 to September 1446, and then later from February 1451 to May 1481. In Mehmed II's first reign, he defeated the crusade led by John Hunyadi after the Hungarian incursions into his country broke the conditions of the truce Peace of Szeged. When Mehmed II ascended the throne again in 1451, he strengthened the Ottoman navy and made preparations to attack Constantinople. Read more on Wikipedia

Mehmed the Conqueror is most famous for his conquest of Constantinople in 1453, which ended the Byzantine Empire.

Page views of Mehmed the Conquerors by language

Among politicians, Mehmed the Conqueror ranks 61 out of 15,577. Before him are Marcus Aurelius, Fidel Castro, Ahmed I, Martin Van Buren, Josip Broz Tito, and Benjamin Franklin. After him are Nicholas II of Russia, Henry Kissinger, John F. Kennedy, Margaret Thatcher, Caligula, and James K. Polk.