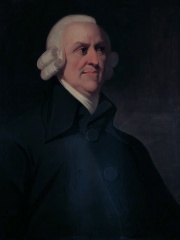 Adam Smith (baptized 16 June [O.S. 5 June] 1723 – 17 July 1790) was a Scottish economist and philosopher who was a pioneer of political economy and key figure during the Scottish Enlightenment. Also known as ''The Father of Economics'' or ''The Father of Capitalism'', he wrote two classic works, The Theory of Moral Sentiments (1759) and An Inquiry into the Nature and Causes of the Wealth of Nations (1776). The latter, often abbreviated as The Wealth of Nations, is considered his magnum opus and the first modern work of economics. Read more on Wikipedia

Since 2007, the English Wikipedia page of Adam Smith has received more than 7,570,397 page views. His biography is available in 148 different languages on Wikipedia (up from 142 in 2019). Adam Smith is the 2nd most popular economist, the 5th most popular biography from United Kingdom and the most popular British Economist.

Adam Smith is most famous for his book "The Wealth of Nations" which was published in 1776. In this book, Smith argues that the pursuit of self-interest leads to the betterment of society.