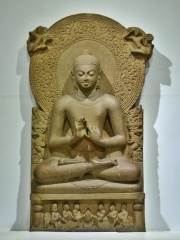 Gautama Buddha (also Siddhārtha Gautama, Siddhattha Gotama; Shakyamuni, Sakkamuni; and The Buddha) was an ascetic and spiritual teacher of ancient India who lived during the 6th or 5th century BCE. He was the founder of Buddhism and is revered by Buddhists as a fully enlightened being who taught a path to Nirvana (lit. vanishing or extinguishing), freedom from ignorance, craving, rebirth and suffering. According to Buddhist tradition, the Buddha was born in Lumbini in what is now Nepal, to highborn parents of the Shakya clan, but abandoned his family to live as a wandering ascetic. Read more on Wikipedia

Gautama Buddha is most famous for being the founder of Buddhism. He is also famous for his teachings on the Four Noble Truths and the Eightfold Path.

Among philosophers, Gautama Buddha ranks 7 out of 1,081. Before him are Aristotle, Plato, Socrates, Confucius, Pythagoras, and René Descartes. After him are Immanuel Kant, Jean-Jacques Rousseau, Avicenna, John Locke, Niccolò Machiavelli, and Friedrich Nietzsche.

Others Deceased in 452 BC

Among PHILOSOPHERS In Nepal