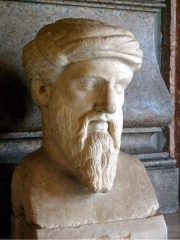 Pythagoras of Samos (Ancient Greek: Πυθαγόρας ὁ Σάμιος, romanized: Pythagóras ho Sámios, lit. 'Pythagoras the Samian', or simply Πυθαγόρας; Πυθαγόρης in Ionian Greek; c. 570 – c. 495 BC) was an ancient Ionian Greek philosopher and the eponymous founder of Pythagoreanism. His political and religious teachings were well known in Magna Graecia and influenced the philosophies of Plato, Aristotle, and, through them, the West in general. Knowledge of his life is clouded by legend, but he appears to have been the son of Mnesarchus, a gem-engraver on the island of Samos. Read more on Wikipedia

Pythagoras is most famous for the Pythagorean theorem, which states that in a right triangle, the square of the hypotenuse is equal to the sum of the squares of the other two sides.

Page views of Pythagoras by language

Among philosophers, Pythagoras ranks 15 out of 1,089. Before him are Jean-Jacques Rousseau, Friedrich Nietzsche, Niccolò Machiavelli, Augustine of Hippo, John Locke, and Francis Bacon. After him are Thomas Aquinas, Georg Wilhelm Friedrich Hegel, Montesquieu, Arthur Schopenhauer, Thomas Hobbes, and Epicurus.

Others Deceased in 495 BC