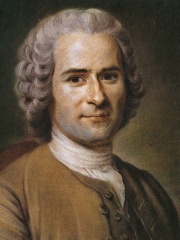 Jean-Jacques Rousseau (UK: , US: French: [ʒɑ̃ ʒak ʁuso]; 28 June 1712 – 2 July 1778) was a Genevan philosopher, writer, and composer. His political philosophy influenced the progress of the Age of Enlightenment throughout Europe, as well as aspects of the French Revolution and the development of modern political, economic, and educational thought.His Discourse on Inequality and The Social Contract are cornerstones in modern political and social thought. Rousseau's sentimental novel Julie, or the New Heloise (1761) was important to the development of preromanticism and romanticism in fiction. Read more on Wikipedia

Jean-Jacques Rousseau was a philosopher and writer who is most famous for his work on the social contract and his ideas on inequality.

Among philosophers, Jean-Jacques Rousseau ranks 9 out of 1,081. Before him are Socrates, Confucius, Pythagoras, René Descartes, Gautama Buddha, and Immanuel Kant. After him are Avicenna, John Locke, Niccolò Machiavelli, Friedrich Nietzsche, Francis Bacon, and Augustine of Hippo.

Among PHILOSOPHERS In Switzerland