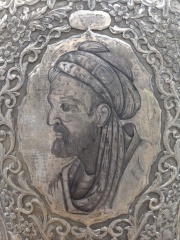 Ibn Sina (Persian: ابن سینا; 980 – June 1037 CE), commonly known in the West as Avicenna (), was a Persian polymath who is regarded as one of the most significant physicians, astronomers, philosophers, and writers of the Islamic Golden Age, and the father of early modern medicine. Sajjad H. Rizvi has called Avicenna "arguably the most influential philosopher of the pre-modern era". He was a Muslim Peripatetic philosopher influenced by Greek Aristotelian philosophy. Read more on Wikipedia

Avicenna is most famous for his writings on medicine and philosophy. He wrote the Canon of Medicine, which was the authoritative text on medicine in Europe until the seventeenth century.

Page views of Avicennas by language

Among philosophers, Avicenna ranks 10 out of 1,081. Before him are Confucius, Pythagoras, René Descartes, Gautama Buddha, Immanuel Kant, and Jean-Jacques Rousseau. After him are John Locke, Niccolò Machiavelli, Friedrich Nietzsche, Francis Bacon, Augustine of Hippo, and Thales of Miletus.

Among people born in 980, Avicenna ranks 1. After him are Pope Benedict VIII, Otto III, Holy Roman Emperor, Olof Skötkonung, Harald II of Denmark, Gisela of Hungary, Humbert I, Count of Savoy, Tancred of Hauteville, Hemma of Gurk, Gerard of Csanád, Mokjong of Goryeo, and Baldwin IV, Count of Flanders. Among people deceased in 1037, Avicenna ranks 1. After him are Bermudo III of León, Vazul, Boleslaus III, Duke of Bohemia, Odo II, Count of Blois, Abu Mansur al-Baghdadi, and Farrukhi Sistani.

Among PHILOSOPHERS In Uzbekistan