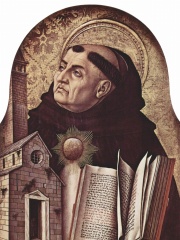 Thomas Aquinas, OP (; Italian: Tommaso d'Aquino, lit. 'Thomas of Aquino'; 1225 – 7 March 1274) was an Italian Dominican friar and priest, who was an immensely influential philosopher, theologian, and jurist in the tradition of scholasticism; he is known within the scholastic tradition as the Doctor Angelicus, the Doctor Communis, and the Doctor Universalis. The name Aquinas identifies his ancestral origins in the county of Aquino in present-day Lazio, Italy. Among other things, he was a prominent proponent of natural theology and the father of a school of thought (encompassing both theology and philosophy) known as Thomism. Read more on Wikipedia

Thomas Aquinas is most famous for his work in the 13th century on the relationship between faith and reason.

Among philosophers, Thomas Aquinas ranks 17 out of 1,081. Before him are John Locke, Niccolò Machiavelli, Friedrich Nietzsche, Francis Bacon, Augustine of Hippo, and Thales of Miletus. After him are Georg Wilhelm Friedrich Hegel, Montesquieu, Thomas Hobbes, Democritus, Arthur Schopenhauer, and Epicurus.