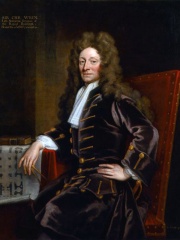 Sir Christopher Wren PRS FRS (; 30 October 1632 [O.S. 20 October] – 8 March 1723 [O.S. 25 February]) was one of the most highly acclaimed English architects in history, as well as an anatomist, astronomer, geometer, and mathematician-physicist. He was accorded responsibility for rebuilding 52 churches in the City of London after the Great Fire in 1666, including what is regarded as his masterpiece, St Paul's Cathedral, on Ludgate Hill, completed in 1710.The principal creative responsibility for a number of the churches is now more commonly attributed to others in his office, especially Nicholas Hawksmoor. Read more on Wikipedia

Christopher Wren is most famous for being the architect of St. Paul's Cathedral in London.

Among architects, Christopher Wren ranks 41 out of 424. Before him are Friedensreich Hundertwasser, Tadao Ando, Hippodamus of Miletus, Ictinus, Arne Jacobsen, and Marcel Breuer. After him are Suger, Callicrates, Giacomo Barozzi da Vignola, Santiago Calatrava, Buckminster Fuller, and Carlo Maderno.

Among ARCHITECTS In United Kingdom