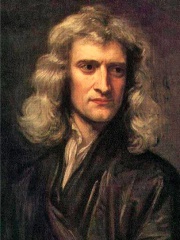 Sir Isaac Newton (25 December 1642 – 20 March 1726/27) was an English mathematician, physicist, astronomer, alchemist, theologian, and author (described in his time as a "natural philosopher"). He was a key figure in the philosophical revolution known as the Enlightenment. His book Philosophiæ Naturalis Principia Mathematica (Mathematical Principles of Natural Philosophy), first published in 1687, established classical mechanics. Read more on Wikipedia

Isaac Newton is most famous for his three laws of motion, which he formulated in 1687. The first law states that every object will remain at rest or in uniform motion unless acted upon by an external force. The second law states that the acceleration of an object is directly proportional to the net force acting on it and inversely proportional to its mass. The third law states that when one body exerts a force on a second body, the second body simultaneously exerts a force equal in magnitude and opposite in direction on the first body.