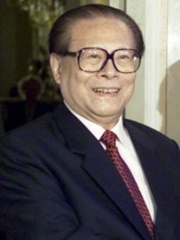 Jiang Zemin (born 17 August 1926) is a Chinese retired politician who served as General Secretary of the Chinese Communist Party from 1989 to 2002, as Chairman of the Central Military Commission of the Chinese Communist Party from 1989 to 2004, and as President of the People's Republic of China from 1993 to 2003. Jiang represented the "core of the third generation" of Chinese Communist Party (CCP) leaders since 1989. Jiang came to power unexpectedly as a compromise candidate following the Tiananmen Square protests of 1989, when he replaced Zhao Ziyang as CCP General Secretary after Zhao was ousted for his support for the student movement. Read more on Wikipedia

Among politicians, Jiang Zemin ranks 489 out of 15,577. Before him are Peter II of Russia, Atahualpa, Alexios I Komnenos, Juan Perón, Charles IV of France, and Frederick III, Holy Roman Emperor. After him are Menachem Begin, Şehzade Cihangir, Nader Shah, Macrinus, Alfonso XIII of Spain, and Yazid I.