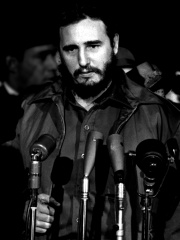 Fidel Alejandro Castro Ruz (; American Spanish: [fiˈðel aleˈxandɾo ˈkastɾo ˈrus]; 13 August 1926 – 25 November 2016) was a Cuban revolutionary and politician who served as Prime Minister of Cuba from 1959 to 1976 and President from 1976 to 2008. Ideologically a Marxist-Leninist and Cuban nationalist, he also served as the First Secretary of the Communist Party of Cuba from 1961 until 2011. Read more on Wikipedia

Since 2007, the English Wikipedia page of Fidel Castro has received more than 16,467,381 page views. His biography is available in 142 different languages on Wikipedia making him the 42nd most popular politician.

Among politicians, Fidel Castro ranks 42 out of 14,801. Before him are Qin Shi Huang, Ronald Reagan, Louis XVI of France, Hurrem Sultan, Peter the Great, and Leon Trotsky. After him are Huang Xianfan, Caligula, Martin Van Buren, Josip Broz Tito, Akhenaten, and Marcus Aurelius.