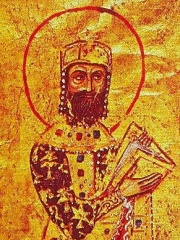 Alexios I Komnenos (Greek: Ἀλέξιος Α' Κομνηνός, 1056/1057 – 15 August 1118), Latinized Alexius I Comnenus, was Byzantine emperor from 1081 to 1118. Although he was not the founder of the Komnenian dynasty, it was during his reign that the Komnenos family came to full power. Inheriting a collapsing empire and faced with constant warfare during his reign against both the Seljuq Turks in Asia Minor and the Normans in the western Balkans, Alexios was able to curb the Byzantine decline and begin the military, financial, and territorial recovery known as the Komnenian restoration. Read more on Wikipedia

Alexios I Komnenos is most famous for being the founder of the Komnenian dynasty, which ruled the Byzantine Empire from 1081 to 1185.

Page views of Alexios I Komnenos by language

Among politicians, Alexios I Komnenos ranks 482 out of 15,710. Before him are Igor of Kiev, Emperor Gaozu of Han, Gustaf V of Sweden, Louis VII of France, Şehzade Bayezid, and Sergio Mattarella. After him are Stephen Báthory, Louis VIII of France, Imre Nagy, Frederick IX of Denmark, Moshe Dayan, and William IV of the United Kingdom.

Among people born in 1048, Alexios I Komnenos ranks 2. Before him is Omar Khayyam. After him are Emperor Shenzong of Song, Antipope Benedict X, Magnus II of Norway, and Peter I, Count of Savoy. Among people deceased in 1118, Alexios I Komnenos ranks 1. After him are Pope Paschal II, Baldwin I of Jerusalem, Philip of Sweden, Maria of Alania, Matilda of Scotland, Adelaide del Vasto, Al-Mustazhir, Muhammad I Tapar, and Philippa, Countess of Toulouse.