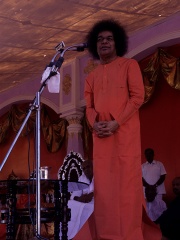 Sathya Sai Baba (born Ratnakaram Sathyanarayana Raju; 23 November 1926 – 24 April 2011) was an Indian guru. At the age of fourteen, he claimed that he was the reincarnation of Shirdi Sai Baba, and left his home to serve his devotees.Sai Baba's believers credited him with miracles such as materialisations of vibhuti (holy ash) and other small objects such as rings, necklaces and watches, along with reports of miraculous healings, resurrections, clairvoyance, bilocation and was allegedly omnipotent and omniscient. Multiple studies have concluded that his acts were based on sleight of hand or had other explanations that were not supernatural, although his devotees believe them to be signs of his divinity.In 1972, Sathya Sai Baba founded the Sri Sathya Sai Central Trust. Read more on Wikipedia

Sathya Sai Baba is most famous for his ability to perform miracles. He has also been known to heal people and predict future events.

Among religious figures, Sathya Sai Baba ranks 264 out of 2,238. Before him are Pope Paschal I, Philip Melanchthon, Pope Benedict IX, Pope John XIX, Pope Gregory IV, and Pope Urban IV. After him are Pope Sixtus I, Saint Pantaleon, Pope Celestine I, Pope Gelasius II, Habakkuk, and Gregory of Nyssa.