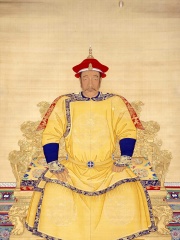 Nurhaci (14 May 1559 – 30 September 1626) was a Jurchen chieftain who rose to prominence in the late 16th century in Manchuria. He was a member of the House of Aisin-Gioro, and reigned as the founding khan of the Later Jin dynasty of China from 1616 to 1626. Nurhaci reorganized and united various Jurchen tribes (the later "Manchu"), consolidated the Eight Banners military system, and eventually launched attacks on both the Ming and Joseon dynasties. Read more on Wikipedia

Nurhaci is most famous for uniting the Mongol tribes and unifying China.

Page views of Nurhacis by language

Among politicians, Nurhaci ranks 622 out of 15,577. Before him are Charles the Simple, Khufu, Juliana of the Netherlands, Amenhotep I, Chandragupta Maurya, and Catiline. After him are Elena Ceaușescu, George I of Greece, Umar II, Gustaf V of Sweden, Sennacherib, and Sargon II.