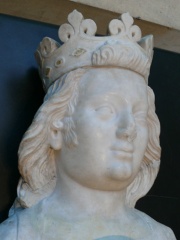 Charles IV (18/19 June 1294 – 1 February 1328), called the Fair (le Bel) in France and the Bald (el Calvo) in Navarre, was last king of the direct line of the House of Capet, King of France and King of Navarre (as Charles I) from 1322 to 1328. Charles was the third son of Philip IV; like his father, he was known as "the fair" or "the handsome".Beginning in 1323 Charles was confronted with a peasant revolt in Flanders, and in 1324 he made an unsuccessful bid to be elected Holy Roman Emperor. As Duke of Guyenne, King Edward II of England was a vassal of Charles, but he was reluctant to pay homage to another king. Read more on Wikipedia

Charles IV of France is most famous for being the first king of France to be crowned in Reims.

Page views of Charles IV of Frances by language

Among politicians, Charles IV of France ranks 408 out of 15,710. Before him are Radovan Karadžić, Moctezuma II, Mithridates VI of Pontus, Rüstem Pasha, Charles I of England, and Carl Gustaf Emil Mannerheim. After him are Mahmud I, Servius Tullius, Henry the Fowler, Rurik, Taejo of Joseon, and Charles the Fat.