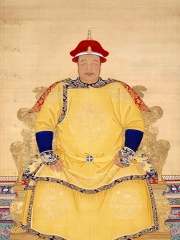 Hong Taiji (28 November 1592 – 21 September 1643), sometimes written as Huang Taiji and sometimes referred to as Abahai in Western literature, was the second khan of the Later Jin (reigned from 1626 to 1636) and the founding emperor of the Qing dynasty (reigned from 1636 to 1643). He was responsible for consolidating the empire that his father Nurhaci had founded and laid the groundwork for the conquest of the Ming dynasty, although he died before this was accomplished. He was also responsible for changing the name of the Jurchen ethnicity to "Manchu" in 1635, and changing the name of his dynasty from "Great Jin" to "Great Qing" in 1636. Read more on Wikipedia

Hong Taiji is most famous for conquering the Ming Dynasty and establishing the Qing Dynasty.

Among politicians, Hong Taiji ranks 681 out of 15,577. Before him are Ladislaus the Posthumous, Olaf Scholz, Aldo Moro, Vytautas, Irene of Athens, and Arnulf of Carinthia. After him are Michael VIII Palaiologos, Maxentius, Ion Antonescu, Franjo Tuđman, Afonso I of Portugal, and Augustus III of Poland.