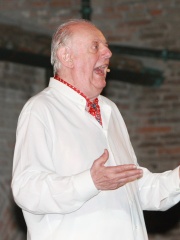 Dario Luigi Angelo Fo (Italian pronunciation: [ˈdaːrjo ˈfɔ]; 24 March 1926 – 13 October 2016) was an Italian playwright, actor, theatre director, stage designer, songwriter, political campaigner for the Italian left wing and the recipient of the 1997 Nobel Prize in Literature. In his time he was "arguably the most widely performed contemporary playwright in world theatre". Much of his dramatic work depends on improvisation and comprises the recovery of "illegitimate" forms of theatre, such as those performed by giullari (medieval strolling players) and, more famously, the ancient Italian style of commedia dell'arte.His plays have been translated into 30 languages and performed across the world, including in Argentina, Bulgaria, Canada, Chile, Iran, the Netherlands, Poland, Romania, South Africa, South Korea, Spain, Sri Lanka, Sweden, the United Kingdom, the United States and Yugoslavia. Read more on Wikipedia

Dario Fo is most famous for his work as a playwright, actor, and director. He's best known for his plays "Accidental Death of an Anarchist" and "Can't Pay? Won't Pay!"