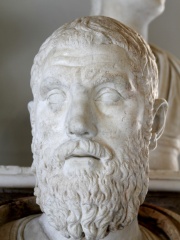 Marcus Opellius Macrinus (; c. 165 – June 218) was Roman emperor from April 217 to June 218, reigning jointly with his young son Diadumenianus. As a member of the equestrian class, he became the first emperor who did not hail from the senatorial class and also the first emperor who never visited Rome during his reign. Before becoming emperor, Macrinus served under Emperor Caracalla as a praetorian prefect and dealt with Rome's civil affairs. Read more on Wikipedia

Since 2007, the English Wikipedia page of Macrinus has received more than 911,302 page views. His biography is available in 69 different languages on Wikipedia (up from 65 in 2019). Macrinus is the 417th most popular politician (up from 539th in 2019), the 6th most popular biography from Algeria and the most popular Algerian Politician.

Macrinus was a Roman emperor who ruled from 217 to 218. He is most famous for being the last of the so-called "Five Good Emperors" of Rome.

Page views of Macrinuses by language

Among politicians, Macrinus ranks 417 out of 15,710. Before him are Henry the Fowler, Rurik, Taejo of Joseon, Charles the Fat, Frederick III, German Emperor, and Sukarno. After him are Matthias, Holy Roman Emperor, Louis the German, John III Sobieski, Hongwu Emperor, Solon, and Idi Amin.