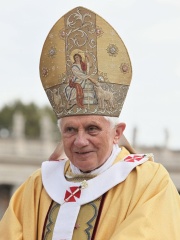 Pope Benedict XVI (Latin: Benedictus XVI; Italian: Benedetto XVI; German: Benedikt XVI.; born Joseph Aloisius Ratzinger, German: [ˈjoːzɛf ʔaˈlɔʏzi̯ʊs ˈʁatsɪŋɐ], on 16 April 1927) is a retired prelate of the Catholic church who served as the head of the church and the sovereign of the Vatican city state from 2005 until his resignation in 2013. Benedict's election as pope occurred in the 2005 papal conclave that followed the death of Pope John Paul II. Benedict chose to be known by the title "pope emeritus" upon his resignation.Ordained as a priest in 1951 in his native Bavaria, Ratzinger embarked on an academic career and established himself as a highly regarded theologian by the late 1950s. He was appointed a full professor in 1958 at the age of 31. Read more on Wikipedia

Pope Benedict XVI is most famous for being the pope who resigned.

Among religious figures, Pope Benedict XVI ranks 24 out of 2,272. Before him are Solomon, John Calvin, Aaron, Ali, Saint Joseph, and Abu Bakr. After him are Mary Magdalene, Andrew the Apostle, Saint Nicholas, James, son of Zebedee, Jonah, and Matthew the Apostle.