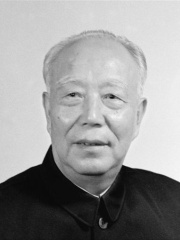 Wan Li (1 December 1916 – 15 July 2015) was a Chinese Communist revolutionary and politician. During a long administrative career in the People's Republic of China, he served successively as Vice Premier, Chairman of the Standing Committee of the National People's Congress (NPC), and a member of the Communist Party of China (CPC) Secretariat and its Politburo. Wan joined the Communist Party of China in 1936 and led revolutionary and wartime resistance activities in his native Shandong province. Read more on Wikipedia

Since 2007, the English Wikipedia page of Wan Li has received more than 85,330 page views. His biography is available in 16 different languages on Wikipedia making him the 10,302nd most popular politician.

Among politicians, Wan Li ranks 10,249 out of 14,801. Before him are Çandarlızade Ali Pasha, Charibert of Laon, William I, Count of Boulogne, Aleksandar Malinov, Tosiwo Nakayama, and Ramesuan. After him are Joseph Vendryes, Princess Mary, Duchess of Gloucester and Edinburgh, Filippo Turati, Kurigalzu II, Adone Zoli, and Igor Dodon.