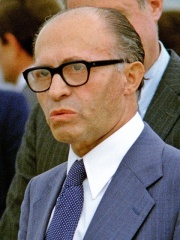 Menachem Begin (Hebrew: מְנַחֵם בֵּגִין Menaḥem Begin (IPA: [menaˈχem ˈbeɡin] (listen)); Polish: Menachem Begin (Polish documents, 1931–1937); Russian: Менахем Вольфович Бегин Menakhem Volfovich Begin; 16 August 1913 – 9 March 1992) was an Israeli politician, founder of Likud and the sixth Prime Minister of Israel. Before the creation of the state of Israel, he was the leader of the Zionist militant group Irgun, the Revisionist breakaway from the larger Jewish paramilitary organization Haganah. He proclaimed a revolt, on 1 February 1944, against the British mandatory government, which was initially opposed by the Jewish Agency. Read more on Wikipedia

Menachem Begin is most famous for being the Prime Minister of Israel from 1977-1983.

Among politicians, Menachem Begin ranks 490 out of 15,577. Before him are Atahualpa, Alexios I Komnenos, Juan Perón, Charles IV of France, Frederick III, Holy Roman Emperor, and Jiang Zemin. After him are Şehzade Cihangir, Nader Shah, Macrinus, Alfonso XIII of Spain, Yazid I, and Cnut the Great.