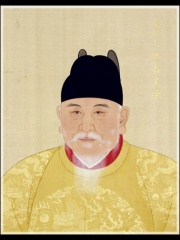 The Hongwu Emperor (21 October 1328 – 24 June 1398) Zhu Yuanzhang (Chinese: 朱元璋; Wade–Giles: Chu Yuan-chang), was the founding emperor of the Ming dynasty, reigning from 1368 to 1398.As famine, plagues and peasant revolts swept across China in the 14th century, Zhu Yuanzhang rose to command the forces that conquered China, ending the Mongol-led Yuan dynasty and forcing the Mongols to retreat to the Eurasian Steppe. Zhu claimed the Mandate of Heaven and established the Ming dynasty at the beginning of 1368 and occupied the Yuan capital, Khanbaliq (present-day Beijing), with his army that same year. Trusting only his family, he made his many sons powerful feudal princes along the northern marches and the Yangtze valley. Read more on Wikipedia

Among politicians, Hongwu Emperor ranks 421 out of 15,710. Before him are Frederick III, German Emperor, Sukarno, Macrinus, Matthias, Holy Roman Emperor, Louis the German, and John III Sobieski. After him are Solon, Idi Amin, Peisistratos, Christian VII of Denmark, Lothair I, and Honorius.

Among people born in 1328, Hongwu Emperor ranks 1. After him are Antipope Benedict XIII, Louis II, Elector of Brandenburg, Joan of Kent, Eleanor of Portugal, Queen of Aragon, Peter I of Cyprus, Emperor Go-Murakami, Blanche of France, Duchess of Orléans, and Nikephoros II Orsini. Among people deceased in 1398, Hongwu Emperor ranks 1. After him are Jeong Dojeon, Blanche of Navarre, Queen of France, Rupert II, Elector Palatine, Emperor Sukō, James I of Cyprus, and Roger Mortimer, 4th Earl of March.