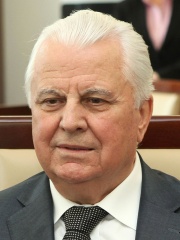 Leonid Makarovych Kravchuk (Ukrainian: Леонід Макарович Кравчук; born 10 January 1934) is a former Ukrainian politician and the first President of Ukraine, who served from 5 December 1991 until 19 July 1994. He is also a former Chairman of the Verkhovna Rada and People's Deputy of Ukraine serving in the Social Democratic Party of Ukraine (united) faction. After a political crisis involving the President and the Prime Minister, Kravchuk resigned from the Presidency, but ran for a second term as President in 1994. Read more on Wikipedia

Among politicians, Leonid Kravchuk ranks 2,132 out of 15,710. Before him are Ellen Johnson Sirleaf, Dom Pérignon, Emeric Thököly, Choe Yong-gon, Francisco Solano López, and Cleomenes I. After him are Shajar al-Durr, Kara Ahmed Pasha, Moctezuma I, Emperor Annei, Al-Hakam II, and Dési Bouterse.