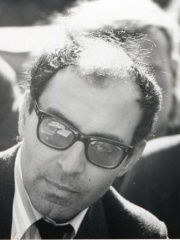 Jean-Luc Godard (UK: GOD-ar, US: goh-DAR; French: [ʒɑ̃ lyk ɡɔdaʁ]; born 3 December 1930) is a French-Swiss film director, screenwriter and film critic. He rose to prominence as a pioneer of the 1960s French New Wave film movement, and is arguably the most influential French filmmaker of the post-war era. According to AllMovie, his work "revolutionized the motion picture form" through its experimentation with narrative, continuity, sound, and camerawork.During his early career as a film critic for the influential magazine Cahiers du Cinéma, Godard criticized mainstream French cinema's "Tradition of Quality", which emphasized established convention over innovation and experimentation. Read more on Wikipedia

Jean-Luc Godard is most famous for his innovative and influential filmmaking style, which includes the use of jump cuts, hand-held cameras, and natural lighting.