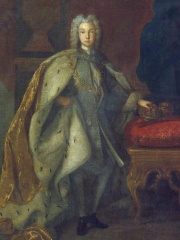 Peter II Alexeyevich (Russian: Пётр II, Пётр Алексеевич, Pyotr Vtoroy, Pyotr Alekseyevich, 23 October [O.S. 12 October] 1715 – 30 January [O.S. 19 January] 1730) reigned as Emperor of Russia from 1727 until his untimely death at the age of 14. He was the only son of Tsarevich Alexei Petrovich (son of Peter the Great by his first wife, Eudoxia Lopukhina) and of Charlotte Christine of Brunswick-Lüneburg. Read more on Wikipedia

Peter the Great was the first emperor of Russia and is most famous for his reforms of the Russian government and society.

Page views of Peter II of Russias by language

Among politicians, Peter II of Russia ranks 483 out of 15,577. Before him are Ibn Saud, Joseph I, Holy Roman Emperor, Artaxerxes I of Persia, Richard II of England, Lycurgus of Sparta, and Lucius Verus. After him are Atahualpa, Alexios I Komnenos, Juan Perón, Charles IV of France, Frederick III, Holy Roman Emperor, and Jiang Zemin.