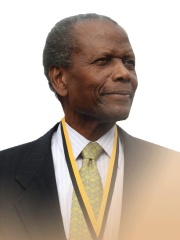 Sidney Poitier (; born February 20, 1927) is a Bahamian-American actor, film director, and ambassador. He won an Academy Award for Best Actor, the first black male and Afro-Bahamian actor to win that award, and was nominated a second time. In addition, he was nominated six times for the Golden Globe Award for Best Actor (four times under Motion Picture Drama, and once for both Miniseries or Television Film, and Motion Picture Musical or Comedy) and the British Academy of Film and Television Arts Award (BAFTA) for Best Foreign Actor, winning each once. Read more on Wikipedia

Since 2007, the English Wikipedia page of Sidney Poitier has received more than 6,861,860 page views. His biography is available in 77 different languages on Wikipedia making him the 245th most popular actor.