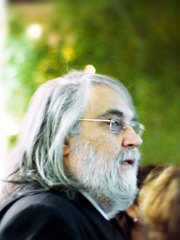 Evangelos Odysseas Papathanassiou (Greek: Ευάγγελος Οδυσσέας Παπαθανασίου [eˈvaɲɟelos oðiˈseas papaθanaˈsi.u]; 29 March 1943 – 17 May 2022), known professionally as Vangelis ( vang-GHEL-iss; Greek: Βαγγέλης [vaɲˈɟelis]), was a Greek composer and arranger of electronic, progressive, ambient, and classical orchestral music. He was best known for his Academy Award-winning score to Chariots of Fire (1981), as well as for composing scores to the films Blade Runner (1982), Missing (1982), Antarctica (1983), The Bounty (1984), 1492: Conquest of Paradise (1992), and Alexander (2004), and for the use of his music in the 1980 PBS documentary series Cosmos: A Personal Voyage by Carl Sagan.Born in Agria and raised in Athens, Vangelis began his career in the 1960s as a member of the rock bands The Forminx and Aphrodite's Child; the latter's album 666 (1972) is now recognised as a progressive-psychedelic rock classic. Vangelis first settled in Paris, and gained initial recognition for his scores to the Frédéric Rossif animal documentaries L'Apocalypse des Animaux, La Fête sauvage, and Opéra sauvage. Read more on Wikipedia

Vangelis is most famous for his work on the soundtrack to the film "Chariots of Fire" which won an Academy Award for Best Original Score.

Page views of Vangelis by language

Among COMPOSERS In Greece