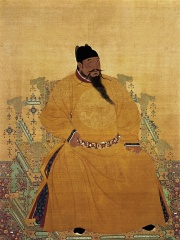 The Yongle Emperor (simplified Chinese: 永乐帝; traditional Chinese: 永樂帝; pinyin: Yǒnglè Dì; Wade–Giles: Yung-le Ti; pronounced [jʊ̀ŋlɤ̂ tî]; 2 May 1360 – 12 August 1424), personal name Zhu Di (Chinese: 朱棣; pinyin: Zhū Dì; Wade–Giles: Chu Ti), was the third Emperor of the Ming dynasty, reigning from 1402 to 1424. Zhu Di was the fourth son of the Hongwu Emperor, the founder of the Ming dynasty. He was originally enfeoffed as the Prince of Yan (燕王) in May 1370, with the capital of his princedom at Beiping (modern Beijing). Read more on Wikipedia

Yongle emperor is most famous for building the Forbidden City, which is the imperial palace in Beijing.

Among politicians, Yongle Emperor ranks 414 out of 15,577. Before him are Abdullah of Saudi Arabia, Charles III of Spain, Louis Bonaparte, Louis VIII of France, George III of the United Kingdom, and Baibars. After him are Oleg of Novgorod, José Mujica, Matthias, Holy Roman Emperor, George II of Great Britain, Severus Alexander, and Albert II of Belgium.