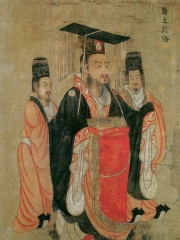 Liu Bei (Chinese: 劉備, pronunciation ; Mandarin pronunciation: [ljǒʊ pêɪ]; 161 – 10 June 223), courtesy name Xuande (玄德), was a warlord in the late Eastern Han dynasty who founded the state of Shu Han in the Three Kingdoms period and became its first ruler. Although he was a distant relative of the Han imperial family, Liu Bei's father died when he was a child and left his family impoverished. To help his mother, he sold shoes and straw mats. Read more on Wikipedia

Liu Bei is most famous for being a general who served in the late Eastern Han dynasty. He was a descendant of Liu Zhen, Prince Jing of Zhongshan.

Among politicians, Liu Bei ranks 397 out of 15,577. Before him are Indira Gandhi, Louis II of Hungary, Vladimir the Great, Mithridates VI of Pontus, Philip VI of France, and Narmer. After him are Erich Honecker, Peisistratos, Frederick III, German Emperor, Boris Godunov, Maximilian I of Mexico, and Sergey Lavrov.