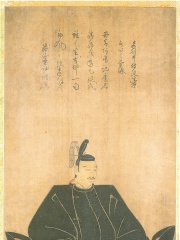 Ii Naomasa (井伊 直政, March 4, 1561 – March 24, 1602) was a general under the Sengoku period daimyō, and later shōgun, Tokugawa Ieyasu. He is regarded as one of the Four Guardians of the Tokugawa along with Honda Tadakatsu, Sakakibara Yasumasa, and Sakai Tadatsugu. He led the clan after the death of his foster mother, Ii Naotora. Read more on Wikipedia

Since 2007, the English Wikipedia page of Ii Naomasa has received more than 258,918 page views. His biography is available in 16 different languages on Wikipedia (up from 15 in 2019). Ii Naomasa is the 6,078th most popular politician (down from 5,956th in 2019), the 489th most popular biography from Japan and the 181st most popular Japanese Politician.

Among politicians, Ii Naomasa ranks 6,078 out of 15,710. Before him are Princess Victoria of Saxe-Coburg and Gotha, Infanta María Teresa of Spain, William I, Count of Burgundy, Jerzy Buzek, Sophie Blanchard, and Yin Lihua. After him are Qasar, Princess Friederike of Brandenburg-Schwedt, Diagoras of Rhodes, Frederick III, Landgrave of Thuringia, Richilde of Provence, and Aleksander Kwaśniewski.

Among people born in 1561, Ii Naomasa ranks 7. Before him are Francis Bacon, Jacopo Peri, Luis de Góngora, Katō Kiyomasa, Santorio Santorio, and Henry Briggs. After him are Anna Maria of the Palatinate, Adriaan van Roomen, Thomas Fincke, and Mary Sidney. Among people deceased in 1602, Ii Naomasa ranks 6. Before him are Giacomo della Porta, Agostino Carracci, Renata of Lorraine, Emilio de' Cavalieri, and Abu'l-Fazl ibn Mubarak. After him are Li Zhi, Friedrich Wilhelm I, Duke of Saxe-Weimar, Catherine of Brandenburg-Küstrin, Thomas Morley, and Juan de Fuca.